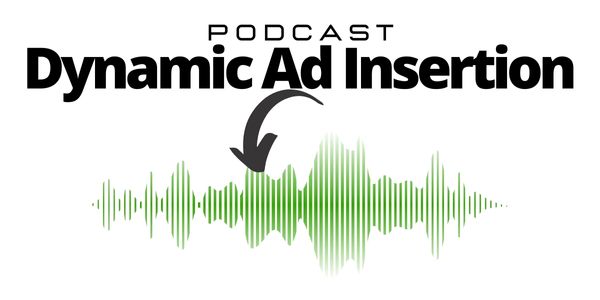 Dynamic Ad Insertion allows you to place advertising in predetermined positions within your podcast. The “dynamic” part means that you can swap out advertising segments in podcasts that have already been published without having to touch the recording again.

Whether inserting advertisements from sponsors or announcements about your business, Dynamic Ad Insertion provides flexibility in updating brief messages within your podcast episodes.

What is a “Baked-In” advertisement vs Dynamic Ad Insertion?

When a podcast is recorded, the end result is an mp3 audio file. This audio file, from beginning to end, is a recording of the podcast episode. When an advertisement is recorded into this audio and heard as a part of this single mp3 file, it is considered “baked-in” to the recording.

The term “baked-in” is used because the advertisement is an ingredient of the final audio file just as sugar would be baked into a cake. It is a part of the final product and cannot be separated from it later. Whether spoken by the announcer or mixed in by the producer, this baked-in content is now an inseparable part of the audio.

A Dynamic Ad Insertion, however, is a separate audio file from the main podcast audio file. A Dynamic Ad can be “stitched” or dynamically inserted into the main audio file by software. This software plays the Dynamic Ad at a point before, during, or after the podcast at a point in time that you choose.

Where can ads be placed within a podcast?

Dynamic Ads can be inserted anywhere in your podcast, however, it is best to start with the beginning, the end, and the middle of the podcast. After that, you can continue to add additional advertisements within the podcast while considering the listeners’ experience.

You do not want to place ads too close together in time, nor have any ad run too long. The main ad placement points are called Pre-Roll, Mid-Roll, and Post-Roll.

Advertisers or Sponsors may be interested in running advertisements on a single episode (example: “Episode 15”) or on your entire show (all episodes starting from the first episode to the current).

When creating a Dynamic Ad Insertion, you will want to decide two things:

Your Dynamic Ad can be produced by your podcast producer and voiced by either your host or by one of our professional announcers. You may also have a pre-produced ad from your sponsor.

We can plan a session with your host or sponsor to record the voice portion and our producers can edit, add music, and optimize your advertisement for Dynamic Ad Insertion. You can even produce multiple versions for different placements throughout your podcast episode.

How long should podcast ads be?

We suggest that podcast ads should be 15-30 seconds with 30 seconds being the maximum. Our research has shown that just like radio advertisements, 60-second ads tend to lose the listeners’ attention.

If you have more information to convey than can fit within 30 seconds, we suggest that your host integrate the ad into the podcast conversation and do what is called a “live read”. A live read sounds as if the host is simply providing useful information to the listener in a casual and conversational way. They can still acknowledge the sponsor, however, the script should be written in a way that does not sound like an advertisement or an interruption from the program.