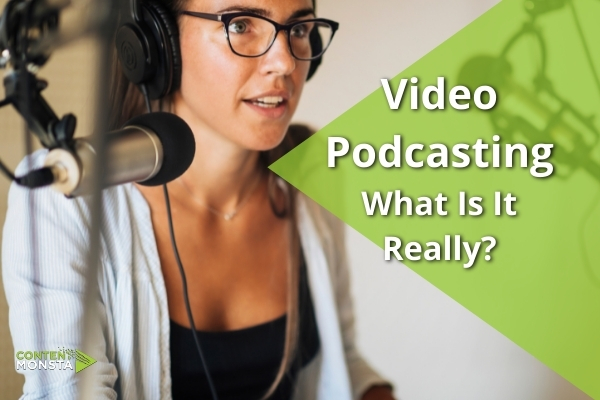 How Is a Video Podcast Different Than an Audio Podcast?

A video podcast is the capturing of video while recording an audio-based podcast. Popular podcasts that have turned their cameras on have given a behind-the-scenes look at the conversation. This video of an audio session has misled many to believe that the video itself was the podcast, rather than simply a video of a podcast recording session. Most video podcasts, or “vodcasts,” are videos of audio recording sessions. The video can be used to promote the audio podcast or serve as a video show content itself.

Podcasts are an “audio first” medium, meaning that the quality of the audio is of utmost importance. This audio is pushed to directories by RSS feeds and then distributed to the devices of podcast show subscribers through listening platforms like Apple Podcasts and Spotify. Today, many podcasters are video recording their audio recording sessions and posting them to YouTube. This is causing the definition of podcasting to change.

Can a Podcast Be Video Too?

To understand the concept of video podcast vs audio podcast, first you need to understand the difference between the two. Traditionally, podcasts are audio-first content. Many content creators do turn on their cameras and record their podcast sessions. This podcast video can then be posted to YouTube or your website. We use the term “audio-first” because capturing quality audio is the top priority.

Video podcasts are actually videos of audio conversations that are captured as video and distributed primarily through YouTube or websites as videocasts or vodcasts.  They are “video first” and have more considerations for capturing good video over good audio. When video-first content is compared to audio-first content such as podcasts, the listening experience will be much better for the audio first podcast than the video first vodcast.

Having video of the session is a bonus. If you want to also produce a video series or create podcast video, you can then create video content as well from your podcast sessions. Keep in mind, depending on the level of quality and video style, this can be an entirely separate project from the podcast itself.

You will want to edit the video for the best presentation on video platforms.

Video requires more attention, therefore engagement times are much shorter. For this reason, most podcasts don’t perform well as videos unless they are produced as full-on video shows. Now you can see why the most popular “podcasts” on YouTube are actually video shows of people recording their audio podcasts. There is either a highly engaging video element or a celebrity that keeps the attention of the viewer. Audio quality may be high, but it is a second thought

What do you Call A Video Podcast?

There is much confusion about what to call a video podcast. Traditionally, a podcast is audio-only and distributed by an RSS feed. This allows subscription platforms like Apple Podcasts and Spotify to automatically keep your device updated with the latest version even if you are offline. You can subscribe or follow a show to keep and get alerted to new episodes.

There were attempts years ago to distribute video in this manner, but even Apple gave up on the method because of low adoption. When these Video On Demand casts had their brief existence, the term VODcast came about. The term vodcast is fading away just as the concept of RSS video feeds is.

Audio podcasts are for passive consumption; meaning that you don’t have to stop what you are doing to pay attention to the content. The popularity of audio-only content grew for this reason.

Because of the popularity of YouTube videos showing podcast interviews, the use of the term ‘video podcast’ is becoming common – whether it is correct or not. A podcast purist would never call a video of a podcast a ‘podcast’ no more than calling a video of someone playing soccer ‘a soccer’. It is a video of the activity, not the activity.

The most accurate name for this content format is Podcast Video. This describes the type of video that you are watching. A video of an audio recording session. For example, you would say – “watch the podcast video of The Business of Marketing on YouTube. There you can see the video of the podcast.”

For those growing audio-first podcasts, having podcast video to share on YouTube and your website can be a huge bonus. Here are some of the formats that video can be used to promote your audio podcast:

Some beginner podcasters capture audio and video during a Zoom conference call. This doesn’t provide a level of audio or video quality comparable to professional podcasts, but may be an option for experimental podcasters with limited budgets and resources.

Yes. But only if you take the time to make it an engaging video. And more importantly, you need to record your podcast with video in mind. Video should not be an after-thought.

With YouTube being the second largest search engine, the opportunity of being discovered on YouTube cannot be ignored. Podcasters have continually realized that posting on YouTube gives them access to a large pool of audiences who would rather watch videos than just listen. Many viewers will become listeners and followers of the audio podcast. While other viewers will return to view more videos of your podcast.

Even though YouTube is a video-focused platform, viewers are increasingly coming to YouTube for podcasts. A survey of Canadian adults found that 43 percent of viewers “went to YouTube for podcasts last year”. This research agrees with research from the NAB Podcast Users National Survey Report that places YouTube ahead of even Apple and Spotify as a platform for podcast discovery and consumption. Keeping in mind that this bends the definition of podcasting a bit, but the consumer doesn’t care what you call it.

However, just posting a boring video of an audio recording session isn’t enough. At a minimum, the video should be edited for a video audience and should show live attention-holding personalities. The attention span of YouTube audiences is much shorter than those listening to audio podcasts. Audio podcasts can retain attention for 30 minutes to over an hour. YouTube videos struggle to maintain attention beyond five minutes unless they are edited with the video audience in mind.

Do You Need an Audio Podcast to Do a Video Podcast?

As mentioned earlier, a video podcast is simply video of a recording session. The idea of a podcast does not have to be a part of the picture at all. You can do a video talk show that is designed specifically for video. A video series posted on YouTube is a video show and does not have to be distributed over audio podcast platforms like Apple Podcasts, Google podcasts, or Spotify.

Still consider that if you have already gone the long route of creating a quality video show, the audio should also be good enough to distribute over audio podcast distribution channels. The only additional element would be to always acknowledge your audio-only audience in everything that you do. This could be as simple as adding links to the visual elements and full video in the audio podcast description.

What additional equipment do you need for video?

The greatest advantage of a “Talking Head” video is that it can easily be produced remotely. The hosts and guests do not have to be in the same location and even the producer can be remote. This method requires less expensive camera equipment and can be achieved with very few technical requirements.

Podcast video is when the video of each host is captured on their own individual camera. This camera is typically a webcam either attached to their computer or on a tripod nearby.

With this method, a single camera angle of video is captured through the same device as the audio. With each person captured on their own camera, a “Talking Head” video can be created by placing these videos side-by-side; either full screen or inside a branded video frame.

A video show of people creating a podcast is entirely different from simply capturing video along with the audio during a podcast session. The items that make this format the most distinct are:

This method is approached as a video talk show. The difference is, the set for the talk show is a podcast studio.

Although this can be accomplished with webcams like the Podcast Video example above, most shows are done with higher-end video cameras or DSLRs that capture video for later post-production. This high-quality video can be edited for different angles including wide angles to show the whole room or multiple hosts at a time.

This is the style made popular by podcasts like the Joe Rogan show, however, it is basically the same thing that traditional radio has done for shows like Howard Stern for years. Coincidentally, no one calls Howard Stern’s TV show “radio”, because it was a TV show ‘of radio.’ Just like a video show of podcasters is a show ‘of a podcast.’

Some listeners will become viewers. Those viewers may watch the video and never continue on to listen to the full audio episode. They may not become podcast subscribers either. This doesn’t mean that they won’t seek to watch your show again. They may even subscribe to your YouTube channel.

Subscriber numbers and download statistics are increasingly unreliable ways to measure the success of a podcast, and adding a video element dilutes these numbers even more. Still, this is no reason to avoid doing podcast videos. Don’t allow the stats to drive your content. The goal is additional content consumption, not stats.

Podcasts are one thing and video of a podcast is another. And they are both great to have!

You just need to decide how far you want to go if you are adding video to your podcast content. You can start capturing pieces of video for promotional content, you can capture full video of your hosts and guests remotely, or you can set up a full-blown studio to create a TV show-like video of your podcast recording session.

Wherever you want to start, Content Monsta can help. We record video and audio podcasts remotely and help you choose the level of production that your content requires. We work mostly with businesses, so our goal is to do all of the heavy lifting for you and create scalable amounts of content with little effort from your team. It doesn’t matter where you are, we can help you create engaging podcasts and video content.

To learn more about professional podcast and video production options for your organization, contact us at Content Monsta for a free consultation. 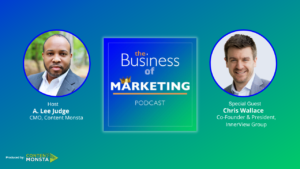 Chris Wallace and I talk about the parallels between marketing and customer experience, Chris’s brand consultancy agency – InnerView Group, how marketers should use data to guide their go-to-market strategies, and the value and effects of internal marketing and branding. 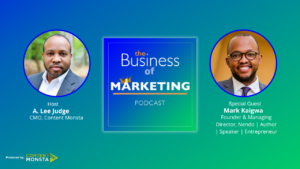 International Marketing From an African Perspective with Mark Kaigwa

Mark Kaigwa and I chat about digital marketing in Africa compared to the global perspective, Mark’s strategy and storytelling consultancy – Nendo, how marketers can drive their digital initiatives, and what marketing trends we need to focus on in 2022. 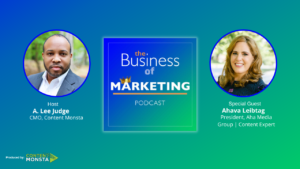 Stay Up To Date

Get Content Marketing tips directly in your inbox by completing the form or connect with us on our social channels below.